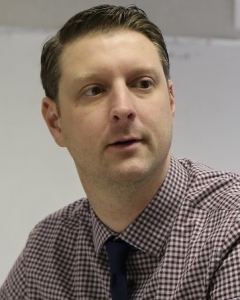 Geoff Krall is a math and school development coach for the New Tech Network, supporting teachers, administrators, and districts as they transform classrooms into vibrant learning communities. He taught high school math in Texas, the last few years of which were under the New Tech model that emphasizes inquiry, collaboration, communication, and real-world connections. Geoff helped pioneer Problem-Based Learning in the network, which has become the predominant pedagogical approach there and is gaining traction in the greater math community.

Wanting to try something new, he moved to Fort Collins, Colorado in 2008 to obtain a master’s degree in Atmospheric Science at Colorado State University. It was also a good excuse to be closer to mountains. Throughout his bird walk into the study of hurricanes, he stayed connected with math education, consulting with the Buck Institute for Education and continuing work with the New Tech Network. He began blogging about math instruction during his master’s program, merging his passion for student-centered math lessons with the academic rigor of a hard science program and interweaving his unique voice, creativity, and humor along the way. You can read more about his approach to math and other educational topics at http://emergentmath.com.

After obtaining his master’s degree in 2011, he joined New Tech Network full time as a coach, where he’s had the opportunity to travel to hundreds of schools across the country to support and learn from math educators. He’s also been a part of several design teams including those focused on assessment, inquiry, systemic improvement, and other aspects that are key to a complex educational ecosystem. A regular at math conferences, you can often find him speaking at math-related events, which have included NCTM’s ShadowCon in 2017. He continues to live and play in Fort Collins with his wife, two children, four cats, and varying numbers of chickens.